What Is the Geography of Asia?

What Is the Climate Like?, How Is the Land in Asia Used?

Learning about Asia means learning about its geography. Asia covers more of the earth's surface than North America, Australia, and Europe combined. Asia also has 60.4% of the world's population. There are deserts, tropical rain forests, and the highest mountains in the world. Asia's geography affects where people live and where they grow crops. Because of the physical features and climate, people in Asia can live on only a small part of the total land area.

Asia is one large continent with subcontinents. A subcontinent is a large area of land that is a major part of a continent. But it is considered a separate geographical or political area. Look at the map. You will see that India is part of a subcontinent. Look for the mountain ranges and deserts across Asia. These physical features separate many parts of Asia. They make travel difficult. They also make food difficult to grow.

The Himalayas are the world's highest mountains. They separate the Indian subcontinent from the rest of Asia. Many of Asia's major rivers have their source in the Himalayas. The rivers create fertile land for farming.

Find the Arabian Peninsula in Southwest Asia. The world's largest continuous area of sand desert is here. In some places, the sand is 600 feet (183 m) deep. There are no lakes, rivers, or forests. Water comes from underground springs. This peninsula holds half of the world's oil.

Many important rivers are on the South Asian subcontinent. Some rivers form areas called deltas. A delta is the land at the mouth of a river. This is where the river meets the sea. Rivers leave soil and minerals called sediment. This makes rich, fertile farmland.

The North China Plain is one of the most densely populated regions in the world. The Huang (Yellow) River flows through here. It gets its name from the color of the yellow silt, or fine soil, that it leaves behind. This silt produces rich farmland. The capital of China, Beijing, is located at the edge of the plain.

This chart shows the different elevations of land areas in South and East Asia. 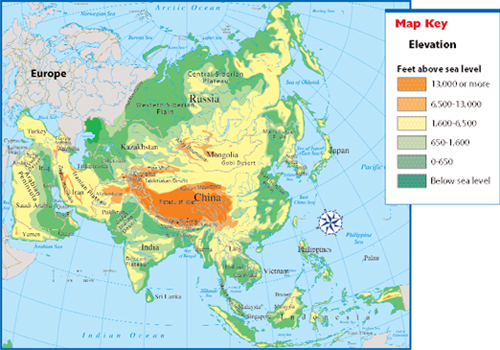 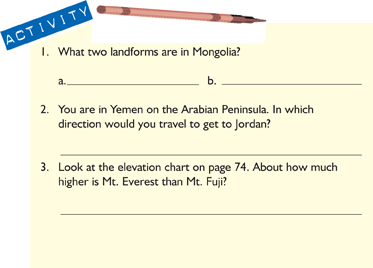 Asia is a huge continent with several subcontinents. It is a continent of contrasts in its landscapes. Asia has the Himalayas, which are the highest mountains in the world. Many people in Asia live in tropical rain forests or in dry deserts. High mountains and large deserts separate many of the people living on this continent.

Asia has many different climates. If you visit Aden, Yemen, you are in the driest place on the earth. Less than two inches of rain falls in a year. Mawsynram, India, is the wettest place on the earth. It has 467 (1,186 cm) inches of rain a year. Monsoons have a huge affect on the climates and weather. Monsoons are seasonal winds. In the winter, they bring dry air from the north. Little rain falls. Summer monsoons bring moist air, causing heavy rains. The rain is important for growing crops to feed animals and people. These summer monsoons often cause flooding. They can destroy homes and farms.

The peninsulas of Southeast Asia and the islands along the equator have tropical climates. One of the largest tropical rain forests in the world is in Indonesia.

The Rub’ al Khali (roob ahl-kah-lee) in southern Saudi Arabia is the world's largest continuous sand desert. Some mountains of sand are more than 1,000 feet (305 m) high. Ten years can pass between rainfalls.

In North and Central Asia, the weather in the high snowy mountains and windy plateaus is bitter cold.

How Is the Land in Asia Used?

Most of the farmland in Asia is near rivers. Thick forests grow in Southeast Asia. In Central Asia, nomads still live on the grasslands. They move their animals and homes from place to place.

How Is the Land in Asia Used?

Most of the farmland in Asia is near rivers. Thick forests grow in Southeast Asia. In Central Asia, nomads still live on the grasslands. They move their animals and homes from place to 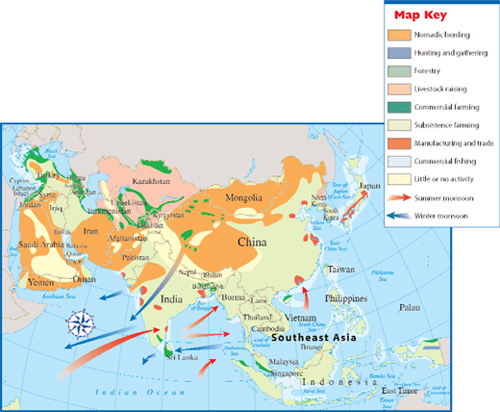 Land Use and Monsoons in Asia 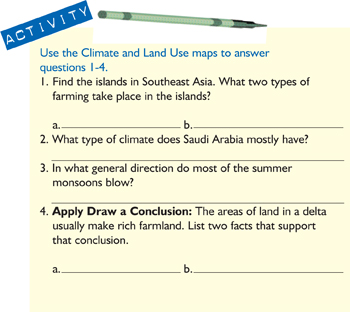 Asia has many different climates. There are many high mountains, large deserts, and tropical areas. Mountain and desert areas make growing crops difficult for many countries in Asia.